Honoring Mary with Icons – Our Lady of Perpetual Help 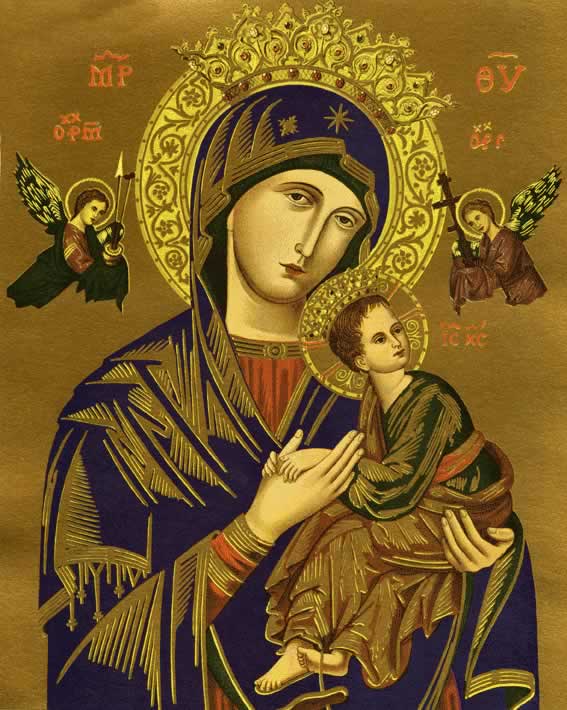 17 Aug Honoring Mary with Icons – Our Lady of Perpetual Help

Our Lady of Perpetual Help, also known as Our Lady of Succor, is a title given to Our Lady, based upon a Byzantine icon with the same name. The icon is painted in tempera on wood and known to be at least five hundred years old. The earliest written account of the image is from a Latin and Italian plaque placed in the church of San Matteo, Via Merulana where, in 1499, it was first venerated by the public. The writer of the icon is unknown, but some believe it may be the work of Saint Luke the Evangelist.

Church legend tells that the icon was stolen by a merchant from Crete who was sailing to Rome. When the merchant sailed, he hid the icon. While on a journey, a violent storm struck and the sailors prayed to the icon for help.
When the ship arrived in Rome, the merchant became ill and, as his dying wish, asked a second merchant to place the icon in a church where it could be venerated. The second merchant shared this with his wife who, upon seeing the icon, denied the dying man’s wish. She, instead, kept the icon and hung it in her home.

Sometime later, Our Lady appeared to the couple’s young daughter asking that the icon be given to a church. Mary told the child that the icon should be placed between the basilicas of Saint Mary Major and Saint John Lateran in Rome.
It was given to the Augustinian Friars and on March 27, 1499, it was transferred to the church of San Matteo.

Crowds flocked to the church where, for nearly three hundred years, many favors were granted through the intercession of the Blessed Virgin. It was, then, called the Madonna di San Matteo.

The Icon is Hidden Once Again

In 1798, the Augustinian monks fled the city of Rome to avoid being captured by Napoleon’s invading armies and they placed the image into hiding. They took the icon to the nearby church of Saint Eusebius, then later to a side altar at Santa Maria Posterula.

The Father General of the Redemptorists, Nicholas Mauron, brought the matter to the attention of Pope Pius IX, who as a boy, had prayed before the picture in San Matteo. The Pope wanted the icon exposed for public veneration.
In a letter, dated December 11, 1865, to Father General Mauron, the pope ordered that Our Lady of Perpetual Succor should be again publicly venerated in Via Merulana, and this time at the new church of Saint Alphonsus.

This was the first favor of the Holy Father towards the icon. He approved the solemn translation of the icon on April 26, 1866, and its coronation, by the Vatican Chapter on June 23, 1867. The pope fixed the feast as Duplex Secundae Classis, on the Sunday before the Feast of the Nativity of Saint John the Baptist and, by a decree dated May 1876, approved a special office and Mass for the Congregation of the Most Holy Redeemer.

Learning that the devotion to Our Lady under this title had spread far and wide, Pius IX raised a confraternity of Our Lady of Perpetual Succor and Saint Alphonsus, which had been erected in Rome, to the rank of an arch-confraternity and enhanced it with many privileges and indulgences. He was among the first to visit the icon in its new home, and his name is the first in the register of the arch confraternity. Two thousand three hundred facsimiles of the Holy Picture have been sent from Saint Alphonsus’s church in Rome to every part of the world. At the present day, not only altars but churches throughout the world are dedicated to Our Lady of Perpetual Help.

Symbolism of the Icon

The image shows the Blessed Virgin Mary wearing a dark red dress with a blue mantle and veil, holding the Child Jesus.

In Byzantine icons, because He is central to the faith, Mary is never shown without Jesus. Symbolically, Jesus is also wearing the clothes of royalty. The green tunic, red sash, and gold brocade portrayed in the image could be worn by only an emperor. The Greek initials to the right of the child and his halo decorated with a cross proclaim that He is “Jesus Christ.”

On the left is the Archangel Michael, carrying the lance and sponge of Jesus’ crucifixion. On the right, the Archangel Gabriel is carrying a three-bar cross and nails. The Christ child is upset by a premonition of his passion and runs to his mother for comfort. With a sorrowful facial expression, Mary is looking directly toward the viewer. Jesus is portrayed clinging to her with a dangling sandal.

At the top of the icon, Greek initials read, “Mother of God, Michael Archangel, Gabriel Archangel, and Jesus Christ.”

Mary Takes us into the Story

Mary’s gaze is fixed outward, but her arms hold Jesus.
She takes us into the story, making us part of the image.
Jesus was frightened and ran to His mother. Mary is calling us to also run to her when we are frightened or troubled. Her hand is, gracefully open, calling us to become one with her Son.

Our Lady of Perpetual Help is commemorated on June 27.